I’ve been quiet on social media and my blogs about my trip from this past weekend because it was a surprise and I didn’t want my parents to get wind of the plans.

My mom turned 75 years old a week ago today. Since this was a monumental birthday – especially with her year-long battle of kicking breast cancer’s butt – back in September my siblings and I cooked up a plan to have a birthday party for her and that I would fly back to Minnesota to surprise her!

The plan was to have the party at the local bar in the tiny town of 600+ people that I’m from. Since one of my sisters lives in the same town that my parents do, I would hang out at her house until the party Friday night. I had to do that because I had limited flights out of Portland and the one I had to take got me there 4 hours before the festivities (and a 7am departure!).

Naturally, my parents show up at my sister’s house unannounced an hour and a half prior to the party. LOL! Luckily, we planned for such an outcome so we could still surprise her so I hid in my sister’s bedroom and she brought Mom over to look at her new paint job in her living room.

Even though the rest of my siblings weren’t there, it was still great to surprise her so thoroughly! She was so happy! 😀

The next day – to the chagrin of my waistline (more on that later) we had our family’s Thanksgiving dinner. All that turkey and gravy and mashed potatoes and dressing and pie. Mmmmmm…pie. Even Moose couldn’t complain about the food.

I even got some great photos:

My mom and me. Her first selfie!

My grandniece being fabulous.

Trust me, I did not miss the snow. 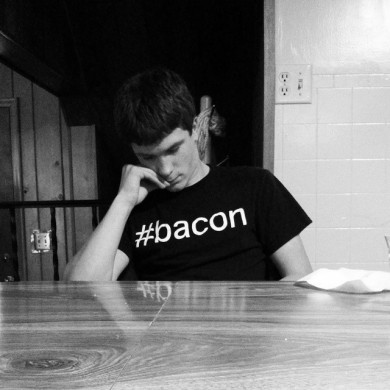 My nephew and his #bacon shirt. Definitely my nephew.

Mt. Hood on the flight home.

Speaking of my pants. I had a pair of jeans that I had attempted to put on about a month ago. When I say “attempted” that means that they would barely get over my hips and the hopes of even getting it zipped/buttoned up was impossible. Not unless I used some industrial strength clamps and cut half my body off.

Since starting CrossFit, I have been trying to not weigh myself. I did a few times and the last time I was quite dismayed to see I had gained 6 lbs since I started. Six pounds?! UGH. That’s the heaviest I’ve ever been!! I thought this was going to get me into shape so I could wear my clothes again!

Flash forward to this past Sunday. On a whim, I tried the same pair of jeans on to just see how much further I needed to go in order to wear them again (and to see how much dieting I would need to do).

I could button and zip them up.

I could still breathe with them buttoned and zipped up.

I WAS WEARING THOSE PANTS THAT WILDLY DIDN’T FIT A MONTH AGO.

Needless to say, I did a happy dance. Wearing those pants.

It’s been one month since I tried CrossFit and my goodness I’ve seen results. I’m still heavier than I’ve ever been, but my clothes fit again. I’ll take it.

2 thoughts on “Surprises and Pants”

Last spring with the big crabapple tree in full bloom. Think we'll plant one at the new house. 🌳
After two days of wrangling cats, being out of our house for most of those two days, thirty showings, and sixteen offers, the house is sold. Now to start packing for the big move to Central NY at the beginning of June. So much to do 😅
These two OMG. 🥰😍🥰😍🥰 #fergalandfiora
Is this a gargoyle or a kitten? 🤣 #fiorakitten
He fell asleep on my slipper. 🥰😻🥰😻🥰 #fergalkitten
Current status #fiorakitten
These two. 🥰🥰🥰🥰 #fergalandfiora
Had a couple of deer in the backyard this morning. Somewhat unusual for us, but cool to see!
Surprised my top nine has more non-cat photos than cat ones. Goodbye 2021, hello 2022!
Merry Christmas! 🎄🎄🎄
They really need to start regulating the allowed amount of cute these two exude because it's downright illegal. 🥰🥰🥰🥰 #fergalandfiora
Today was supposed to be a fun day of shopping, lunch, and mani/pedis with my two sisters. A winter storm had other ideas. 😒
The many faces of Fiora. #fiorakitten
He makes it hard to play video games. What a big baby. 🤣🥰 #fergalkitten
These two. ❤️❤️❤️#fergalandfiora
Two perfect holiday specimens. So festive! #fergalandfiora
They're heeeeeere! Only Funko Pops I'm ever going to buy. Now I need to find a home for them! #pearljam
Cozy Monday snugs. #fergalandfiora