I had an eventful weekend.

And by “eventful” I meant “let’s do stupid shit and hurt ourselves!”

Before you jump to conclusions, I did not hurt myself doing CrossFit. In fact, I just set my PR in the deadlift a few days ago. One hundred and fifty pounds!! That’s almost as much as my body weight.

Yeah, that’s right, you got a big-time badass over here.

No, the stupid shit I did was try to cut an eggplant.

My friend Elaine, when I visited her in NJ in June, showed me how she made eggplant rollatini. This weekend, I had a craving for it and the eggplant at the shops looked good so I went for it.

Now she cut hers by hand, but I’ve had a Pampered Chef mandoline for years, so I thought I’d use that to get nice and uniform slices of eggplant. BEST IDEA EVER.

Until that bastard eggplant got stuck when I was making slices. Stuck where I just pushed a teensy bit harder on it to get it to go through. Guess what happened next?

And my pinky on my right hand met the blisteringly sharp blade of the mandoline.

I said words. Many words. Words that start with the letter “F” and “M” and I’m pretty sure my neighbors now know new, unique ways of swearing. This classic photo of Johnny Cash exemplifies just how I felt at that moment:

Pretty sure Mr. Cash saw an eggplant in the audience. Don’t blame him a bit.

Back to my idiocy.

After a few seconds of me creating new words in the English language, the bleeding began.

Don’t worry, I didn’t take a picture then (I did later, though), but I basically cut through my fingernail. And it bled – a LOT. I was quite relieved to see that I didn’t need stitches – the fingernail saved my actual flesh from being cut a lot worse.

Since my fingernail was still attached to my finger – it was just separated from the rest of the nail – it was just hanging on enough waiting to snag on things (FORESHADOWING). To avoid catching it on things, I bandaged it up with some bandaids and made sure to air it out once a day. The bandage made it difficult to type – just think how often you use your pinky when typing! I was taught to use all my fingers and never deviating from the “home row” when typing. My right pinky gets a workout!

Fast forward to yesterday afternoon. I was airing things out when I thought “man, a soda would be nice” so like an idiot I walked to the fridge and opened the door. With my right hand. I’m pretty sure you don’t need to know what happened next. But, I’ll tell you anyway!

The nail that was hanging on was now hanging on by a fleshy skin thread. It was as gross as that sounded. My husband was alerted to my swearing and he said “you should just take it the rest of the way off.”

My first thought was “are you on drugs?” then I relented because then I wouldn’t need to keep wearing this stupid bandage that was getting in the way of me being able to type normally. But I made him take it the rest of the way off because I couldn’t do it. Surprisingly, it didn’t hurt as bad as I expected – clearly my ineptitude of opening a refrigerator door without hurting myself was the worst part. 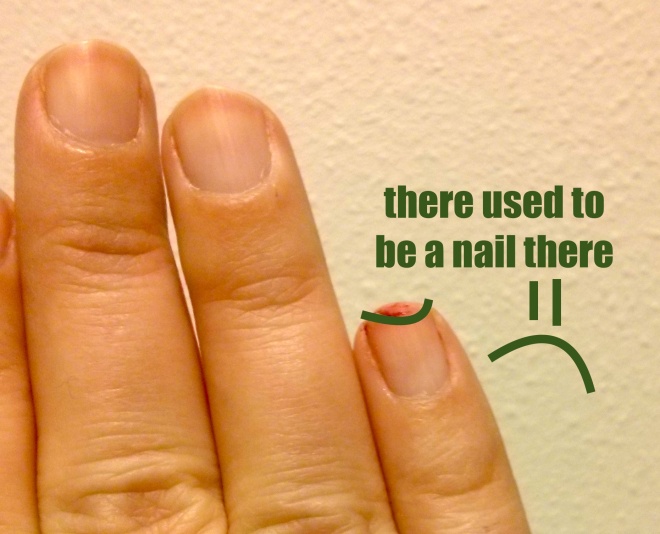 It may not look like much, but then you remember those times when you’ve had a paper cut on your finger – especially those ones you get right at the base of your fingernail (usually from sorting through files in a filing cabinet) – and tell me how much those hurt. Then try slicing part of your finger off and get back to me.

Now that I took care of that snaggy nail that was going to eventually fall off anyway, my finger’s starting to heal up nicely. Still weird having a notch out of my fingernail.

Oh, and the eggplant rollatini was delicious. Fucking eggplant. 😦