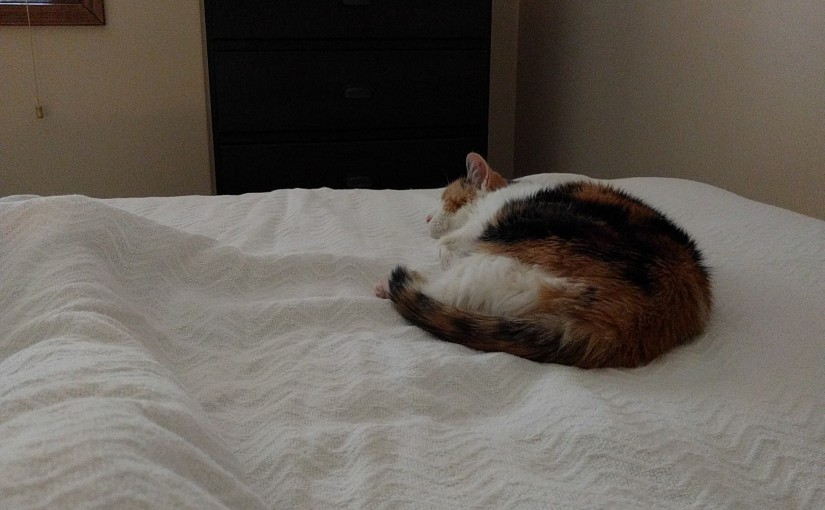 Well, technically it’s been one week and one day since my surgery, but that doesn’t make as succinct of a post title. So sue me. 😛

A few things that have surprised me about this whole journey:

I should note that if you at all get squicked out by talk of surgery, you should just stop reading now. There’s not going to be any pictures or anything related with my surgery in the post – but sometimes people even get squicked out by descriptions so just call this your fair warning.

I’m serious. I’m going to talk about all sorts of stuff – so just close this window and don’t come crying to me if you get squicked out. 😎

Surgery went well. I had what is known as a “total abdominal hysterectomy”: meaning my fallopian tubes, cervix, and uterus were all removed. My ovaries were the wild-card; my doctors didn’t know if I’d be able to keep them until they were doing surgery. Thankfully, I was able to keep them!

I should say I got to keep ~1.75 of my ovaries – one of the fibroids I had was growing into one of my ovaries and they had to cut a bit of it out to get the fibroid off of it. However, it shouldn’t affect its functionality, so I should be good hormone-wise.

What was removed ended up weighing almost two pounds!! Good lord. A normal uterus weighs approximately 50g and two pounds roughly converts to 900g. No wonder I was having so many problems!

My doctor said that one of the multiple (I think they stopped counting after six) fibroids was the “size of a baby’s head”. Fuck. No wonder I had to have an abdominal incision to get it out! I have a photo of what was removed – don’t worry, it’s not getting posted online – and it doesn’t look anything like a female reproductive system. 😨

(If you’re a good friend and you’re local, I’m happy to show you the photo. But be forewarned: it’s gross. My husband has not and will not even look at it.)

My doctor also said that I most likely had been suffering from this (and the symptoms of it) for at minimum two years. One indicator of that was another fibroid had grown into and got stuck in my pelvic bones and they had a heck of a time getting it out!

Looping back to the day of surgery, I’m pretty thankful that my anesthesiologist’s team had me out before we got to the operating room. I think if had seen the equipment and all the machines there I would have had a bit of a freak out. Thus, the last thing I remember was kissing my husband and getting wheeled out of my pre-op room, then the next thing I remember was waking up and groggily asking the nurse there when my surgery was going to start. She laughed and said it was all done and I was in recovery.

I will say being on the receiving end of surgery is much less nerve-wracking then being the person waiting in the waiting room having been through a few surgeries with my parents this year.

My incision ended up being the horizontal or “bikini cut” type. Thank goodness! My swimsuit modeling career can continue!

I’ll just pause so you can fully get that laugh out. 😂

I didn’t have any staples/stitches on the outside but surgical “super glue” – pretty cool stuff. I have dissolvable stitches internally, and those should dissolve over the next month or so as I heal.

I spent two days in the hospital eating applesauce, jello, oatmeal, and scrambled eggs because that’s all I could stomach. I also spent two days watching HGTV and yelling at the TV because of the idiots on Property Brothers, Flip or Flop, and this abomination of a show called My Lottery Dream Home. Now I love me some David Bromstad, but my god do we need to encourage people who were previously poor spend a shit ton of money on a “dream house” that they won’t be able to upkeep with monthly maintenance costs and property taxes? Have we learned nothing from Extreme Makeover: Home Edition? GAWD!

Well that got off track a bit. 😆

The first week of recovery featured:

This week has found a lot of the numbness starting to wear off right around the time when I need to wean myself off the narcotic painkillers. My appetite is back, but my gastrointestinal system is not back to normal. I wasn’t able to have any carbonated drinks that first week (see point two above again) but I’ve been able to keep ginger ale down with no adverse affects. I had two slices of cheese pizza for dinner last night (go shorty…it’s yer birthday) but I followed it up with some Activia yogurt to help my system digest the dairy/refined carbs. I didn’t feel the greatest, but nothing awful happened either. Thus my pizza days go back on hold for a while as I should avoid dairy (except for the yogurt) and greasy foods for a month or two.

I hate that I can’t do much of anything for at least six weeks. I hate feeling so helpless and I hate that I have to ask my husband for so much stuff. I know he says he’s happy to do it, but it has to be a shock for him as well to have to deal with every little stupid thing I need after being with a pretty damn self-sufficient partner for over ten years.

And yes, I’m an indecisive turd when I’m not feeling well. He’s had to run to the store for my latest demands every day since I’ve been home. Sorry sweetie.

However, even with post-surgery pain/discomfort – I already feel better. I don’t feel John Hurt with the Alien fetus is trying to burst out of my abdomen anymore.

I’m also down about five pounds from my pre-surgery weight. I suppose not being able to eat pizza or drink wine on a whim helps that I’m sure. I do think that crazy pile of reproductive organs was also giving me some crazy amounts of hormones as well. I’ve been having issues this year with “the girls” getting bigger. Like to the point where I had to buy bigger bras every few months. Now they’re back to a normal size. Could it be related? Who knows – but I do know that I don’t feel like an overstuffed sausage anymore.

I also took time off and would be going back to work next week – but I’m not sure if I’ll be able to by then. Sitting in a chair or standing for long periods of time really bothers me even with an abdominal binder. I have a sit/stand desk but I don’t really have a comfortable office chair. I have one of those ergonomic chairs that is supposed to “engage your core” and since I’m not supposed to be doing jack shit with my core for 6-8 weeks, I don’t know what I’ll do. I certainly can’t stand for eight hours and trying to type while in bed bothers my back/neck. Fuck.😩

(Yes, I wrote all this in bed. But I started the draft yesterday and had to quit after my back/neck started bothering me. 🙁)

I’m so thankful for Automattic and their “take what time you need” stance with regards to time off – especially after this year. I don’t know what I would have done if I worked for another, less-understanding company. Plus I’ve been getting some “get well soon” presents from some pretty amazing co-workers that’s really brightened my day. ♥

Once I’m back on my feet, I’ll be back to animated gifs and nonsense in no time.

Doin' stuff on the internets since 1998. Lover of bacon and video games. Co-Chief Tater Tot Officer for Automattic View all posts by Carolyn S.