Boobs. Ladies have them. Ladies of a certain age get to have them squished between two plates for fun and profit. 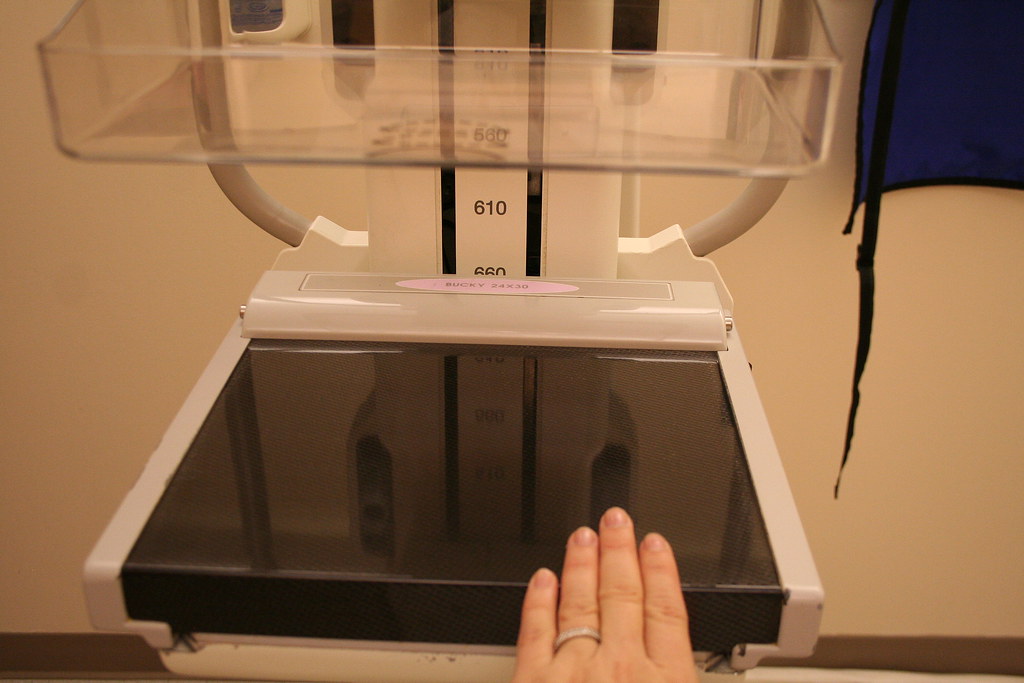 Well, maybe “fun and profit” are a little facetious. But the squishing part is real.

“Here! I’m going to put your boob on this plate, then squish it down with this plastic vice! It’s going to hurt and feel REALLY uncomfortable, but you can’t move until the machine releases you from the crushing vice grip!”

Now do that three times per breast, and you got some fun! And by “fun” I mean “not fun.”

I had to have my first mammogram at the age of 31 when I found a lump in my right breast. The news was terrifying and I had to go through a litany of other tests (including a breast ultrasound and needle biopsy) before I got the diagnosis of a benign fatty lump. After this scare, I came to find out my mom and both my sisters have had the same problems. I was all “why didn’t you tell me!?” SMH

Fast-forward to now. I’m in my 40s and mammograms are now part of the normal list of screenings you have to go through. OH BOY. 😐

Some doctors have discretion over what age and how often you need to have them, but as I already have a high risk factor – my mom had breast cancer – I needed to get one done.

Now I knew what they were going to see – I never had surgery on the benign lump as my doctor said it wouldn’t do any harm and my body would eventually reabsorb it. It has changed over time, but is still there. Thus, I was pretty confident that it would show up on this mammogram, and I was right.

I’ve had the same doctor for over a decade, so they could get my prior mammogram scans and ultrasounds, and compare the two. Easy peasy, right?

Apparently the imaging center deletes any scans that are more than a decade old.

What happened to my medical record? Those scans are pretty fucking important, especially now that I have a higher risk of breast cancer. And now they’re gone?! WTF?

Now that my new doctor out here in Oregon doesn’t have access to those old scans, I need to go in for another breast ultrasound to not only start a new history of what’s going on – since now I lost a decade-old scan – so it can also be monitored going forward.

I’m not nervous about it, but when my mom went in and got her cancer news, she thought it was just another benign lump that she’d been getting her entire life. That hasn’t helped to stop my nagging worst-case-scenario voice from ringing in my ears. What if something’s really changed in that decade? What then? 😱

I also have to have the scans, then wait around the imaging center for them to read them and give me my results. Ughhhhh. It sucks, but I know it has to be done.

Doesn’t make the stress any less, though. Blerg.

We've been in the house for a week now and everything and everyone is settling in. Still have some chaos and unpacking to do, but we're getting there. Met lots of our new neighbors too; such a change from Minnesota. Fergal and Fiora have been having fun exploring the new house once they got over the injustice of the three day car ride. 🙂 #fergalandfiora
Before and after the movers showed up. Got a lot of work to do now. But first, unpacking enough to take a shower. #istink
Gonna miss this view, but excited for finding new views and experiences. Heading out to the new house in NY tomorrow!
Last spring with the big crabapple tree in full bloom. Think we'll plant one at the new house. 🌳
After two days of wrangling cats, being out of our house for most of those two days, thirty showings, and sixteen offers, the house is sold. Now to start packing for the big move to Central NY at the beginning of June. So much to do 😅
These two OMG. 🥰😍🥰😍🥰 #fergalandfiora
Is this a gargoyle or a kitten? 🤣 #fiorakitten
He fell asleep on my slipper. 🥰😻🥰😻🥰 #fergalkitten
Current status #fiorakitten
These two. 🥰🥰🥰🥰 #fergalandfiora
Had a couple of deer in the backyard this morning. Somewhat unusual for us, but cool to see!
Surprised my top nine has more non-cat photos than cat ones. Goodbye 2021, hello 2022!
Merry Christmas! 🎄🎄🎄
They really need to start regulating the allowed amount of cute these two exude because it's downright illegal. 🥰🥰🥰🥰 #fergalandfiora
Today was supposed to be a fun day of shopping, lunch, and mani/pedis with my two sisters. A winter storm had other ideas. 😒
The many faces of Fiora. #fiorakitten
He makes it hard to play video games. What a big baby. 🤣🥰 #fergalkitten
These two. ❤️❤️❤️#fergalandfiora