Yes, I know it’s been a while. The burning question you have in your head is nearly exploding!

“How did your half marathon go?”

See, Mother Nature must’ve felt pity for me because she sent some wicked thunderstorms to save the day! 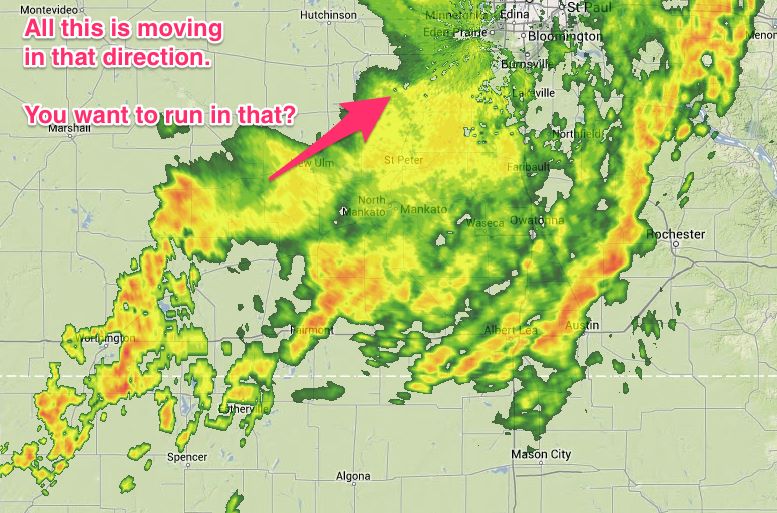 Posted in response to people complaining that the race officials were delaying (and eventually canceling) the race.

When my alarm went off at 5am, the weather report was saying that there would be thunderstorms all morning. Emails/updates from the race officials were few and far between, so I decided at 5:45am (the time I would have needed to leave to get to the start on time) to stay home. I wasn’t going to risk electrocution to stubbornly finish a race.

Then the race officials said the start would be delayed an hour to 7:30am. Finally, officials and law enforcement cancelled the race right around the time of the start. Mainly because of the weather (which turned out to not be a problem after all) but mostly because of the permits that shut down streets throughout the city expired at 1pm, which was the cut off time for the marathon runners (had the race started at 6:30am).

There was a bunch of backlash over the decision, and mostly from whiny people who said things like “I wanted to put that ‘13.1’ sticker on my car.” Really? The months of training didn’t mean anything? So go run your 13.1 miles and put the sticker on your damn car!

Spoilers: those stickers drive me insane. I saw one at Road Runner Sports for a “0.0” sticker and I’m tempted to get one and put it on my car. Trolololo!

Which leads us to what am I up to now?

Since I’m moving, it seems all my free time is taken up with moving preparations. It also means that any friend I’ve ever made in Minneapolis has decided we “MUST GET TOGETHER” before we go. It sucks having to turn some of those down because I’m already booked that day or am out of town.

I’m also starting some weight lifting thanks to my bestie E. She’s a total meathead. I had taken some time off before WordCamp Philly to visit her last week for a much-needed vacation. She took me to the gym a couple of times and came up with a lower and upper body workout that I could get started with. Guess we’ll see how that works out. I cancelled my gym membership, but still can go until the end of this month, so I’ll have a month and a half of no gym access until we get to our new apartment in Oregon. It has a pretty nice (and brand new) fitness center, so hopefully I can bridge that gap without much trouble.

Ok, so it’s been over a month since I’ve made a post. This is not a surprise. Why?

Due to the travel, I didn’t stick to my training regime as strictly as I should have. I did well in Barbados, and did fuck-all in Portland other than two runs under 3 miles. Then being sick made me want to die and not run whatsoever.

Since I hadn’t run in over a week, any distance I had built up was basically lost. The longest “run” I’ve done to date is 9 miles. I say “run” because it was mostly running with pauses to stretch out stiff leg muscles and walking for 30-60 seconds when I got winded.

Now, in order to even finish the race, I’m going to have to use the Galloway plan for running this half. Well, more run/walk the half. Planning on the 3:1 run/walk to start out, but I might be none:all run/walk by the end. I’m pissed because I had been doing great with my training and was en route to having a PR in the half, and now I’m going to be lucky if I finish under 3 hours. 😦

What huge bummer. But, there’s not much I can do at this point – other than to never travel again during training.

Will post the recap after this weekend. Wish me luck!

We've been in the house for a week now and everything and everyone is settling in. Still have some chaos and unpacking to do, but we're getting there. Met lots of our new neighbors too; such a change from Minnesota. Fergal and Fiora have been having fun exploring the new house once they got over the injustice of the three day car ride. 🙂 #fergalandfiora
Before and after the movers showed up. Got a lot of work to do now. But first, unpacking enough to take a shower. #istink
Gonna miss this view, but excited for finding new views and experiences. Heading out to the new house in NY tomorrow!
Last spring with the big crabapple tree in full bloom. Think we'll plant one at the new house. 🌳
After two days of wrangling cats, being out of our house for most of those two days, thirty showings, and sixteen offers, the house is sold. Now to start packing for the big move to Central NY at the beginning of June. So much to do 😅
These two OMG. 🥰😍🥰😍🥰 #fergalandfiora
Is this a gargoyle or a kitten? 🤣 #fiorakitten
He fell asleep on my slipper. 🥰😻🥰😻🥰 #fergalkitten
Current status #fiorakitten
These two. 🥰🥰🥰🥰 #fergalandfiora
Had a couple of deer in the backyard this morning. Somewhat unusual for us, but cool to see!
Surprised my top nine has more non-cat photos than cat ones. Goodbye 2021, hello 2022!
Merry Christmas! 🎄🎄🎄
They really need to start regulating the allowed amount of cute these two exude because it's downright illegal. 🥰🥰🥰🥰 #fergalandfiora
Today was supposed to be a fun day of shopping, lunch, and mani/pedis with my two sisters. A winter storm had other ideas. 😒
The many faces of Fiora. #fiorakitten
He makes it hard to play video games. What a big baby. 🤣🥰 #fergalkitten
These two. ❤️❤️❤️#fergalandfiora